Scott conducted business for Tradecorp at 1027 North Emerald Suite number B1 in Modesto.  Scott had the Sears Gamefisher boat stored at the Warehouse when Laci disappeared.  The State argued that he made anchors in the Warehouse to weigh Laci's body down.

Brocchini and Evers went to the warehouse on the night of December 24, but primarily to see the boat. No search of the warehouse was conducted that night.

It was a part of the December 26-27 search warrant, and Detective Dodge Hendee was the Crime Scene Manager. The MPD secured the warehouse late afternoon on the 26th, and conducted the search on the 27th.

When we got to the warehouse, we met at about 2:30 p.m. in the afternoon on the 27th. At 2:45, after a short briefing, and after the keys to the warehouse arrived, we served the search warrant. I did that by announcing 'Modesto Police Department, search warrant, open the door.' Even though I knew there was nobody in there, we had a police officer standing there all night and day guarding the warehouse, but, because of legal requirements, I made that notification. After 20 [seconds] with no response, I used the keys to gain access to the warehouse. And at that point I went in by myself just to get a feel for what we had inside the warehouse. What kind of a scene it was, what kind of work might be ahead of us. I was in there for about five, maybe seven, ten minutes by myself.  [Hendee]

The following information was gleaned from the lacipeterson.com website.  The date of the search is inaccurate.

By the time of the February 18-19 search warrant, Scott had terminated the lease and vacated the premises. Thus, only one search of the warehouse was conducted. Though the Gamefisher boat was in the warehouse, it and its contents are listed separately.

People's 55 is a drawing of the layout drawn by Detective Rich House.  The squares represent pallets of fertilizer products.

Evidence examined/collected from the Warehouse:

These are pictures taken of the powder voids on the trailer, the pitcher, and the anchor in the pitcher.

Grogan was questioned on the void spots and the anchor:

FLADAGER: What, was there anything about the concrete debris on that flatbed trailer that made you pay attention to it and focus on it?

GROGAN: Well, it was, it was actually Detective Hendee that pointed out the rings in the debris on the trailer to me and I did see those. And I saw there was a significant mess on top of that trailer.

FLADAGER: And when you say rings, what do you mean by "rings"?

GROGAN: Circular voided areas, or they're not perfect circles, but areas that appear circular and I don't know what I would say on a measurement, but they all seemed fairly consistent and there was about a total of five of them.

FLADAGER: Detective Grogan, had you ever worked with concrete yourself or cement?

FLADAGER: Have you ever made it?

FLADAGER: And what you noticed on the trailer, for purposes of making a single anchor, did anything about the mess on that trailer strike you?

JUDGE: State of mind. Overruled. You can answer.

GERAGOS: How could it have been his state of mind at that point?

JUDGE: His state of mind. He's the investigating officer. What he did do as a result of his observations is reasonable enough. Go ahead.

GROGAN: Well, it seemed like a tremendous mess for making one eight-pound anchor.

FLADAGER: And can you please tell us what you asked him.

GROGAN: Well, I asked him about the, we went over some of the same things that are recorded in the 12/30 conversation. The new information was just I talked to him about where he got the idea to make the anchor. He said he rented some boats in the San Diego area in the past and thought it would be easy to make. He told me he made it out of cement because a bag of cement is only $3 as opposed to spending 30 for an anchor from a store.

FLADAGER: Did you later confirm the price of cement at Home Depot?

FLADAGER: And can you tell us what the price was for various sized bags?

FLADAGER: What did you find out?

FLADAGER: And then when did you do that price check?

Both the anchor and the pitcher were collected as evidence and sent to a concrete expert to confirm the conclusion that the anchor was made in the pitcher.

GERAGOS: Okay. And as it was on the trailer, he was taking this item, the concrete, right?

GERAGOS: The anchor, and he was holding it like this?

GERAGOS: As it was inside, right?

GERAGOS: And it was his and your opinion that it was a perfect fit?

GERAGOS: Tell the jury why that was mistakenly so.

HENDEE: Because it was looked at by a concrete expert who determined that this mold was not made in this pitcher.

GERAGOS: Well, it's pretty easy to tell if you put it in there and look and see that there's space, isn't there?

HENDEE: I wouldn't say it's easy.

GERAGOS: May I let the jury see this?

JUDGE: Yes, you can.

GERAGOS: You sent that out to a concrete expert who measured the concrete anchor and the pitcher and determined that this was not made in the plastic pitcher, and yet all he did was measure it, put it inside of there, and he saw that you could get almost, if your hand wasn't as big as mine, you could almost get your finger in there, correct? Between the two?

HENDEE: Well, at the time there was water in it when he put it in; and, secondly, I think there's some other considerations that went into his determining that it was not,

GERAGOS: Right; because there’s a dimple in the bottom of this, correct?

GERAGOS: There's a dimple in the bottom, and there's no dimple on the bottom of the anchor, right?

GERAGOS: And they determined that when you measure this and you put them side by side, just lift this up so they can see, when you measure it, there was one problem with this perfect fit; that's this portion right here, the top, right?

GERAGOS: Was a different size than the portion that corresponds to the pitcher, right?

GERAGOS: And that the bottom portion, that didn't correspond to the bottom of the pitcher, correct?

HENDEE: I've never seen the report, but that's what I was told.

GERAGOS: That's what you were told afterwards?

GERAGOS: At the time you thought Ah-hah, I've got some evidence, because the pitcher fits in there, right?

GERAGOS: All right. And that was part of the, it kind of led you to see those circles on the trailer, too, didn't it?

GERAGOS: I mean, you thought,

JUDGE: Wait, wait, wait. One at a time. Sustained. Argumentative.

GERAGOS: Okay. Well, your idea was that this, the anchor, was made in this, the pitcher?

HENDEE: That's what we thought.

GERAGOS: And then from there you extrapolated that the pitcher was on the trailer, and therefore, if it was in four locations, there must have been four of these, right?

HENDEE: We felt that was a possibility.

GERAGOS: Okay. You thought it was more than a possibility; you searched the Bay 22 times looking for these, right?

GERAGOS: Okay. And it turns out at the end of the day the pitcher never made it, right?

Also, at the end of the day it turns out that Scott had told Grogan in late December that he purchased a paint bucket to make the anchor.

Scott sent a letter to terminate the warehouse lease, with intent to vacate in 30 days. 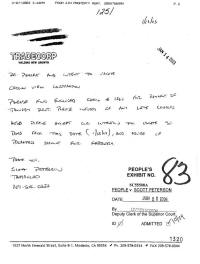 By the time of this search warrant, Scott had vacated the premises and removed all of the furnishing to the house on Covena or to a storage shed.  A picture of Conner's room stuffed with things from the Warehouse was contrasted with Scott's statement to Diane Sawyer on Good Morning America that the nursery would remain ready for Conner.  Also used against Scott was the wastebasket in the storage shed that had Scott and Laci's wedding album.  Geragos had to clarify that the wastebasket was used to store the items, not to throw them away.